TERMS USED IN RUGSOC:The game has evolved using terms which have a common usage and those of a more traditional origin. Both are listed for the information of those seeking a complete knowledge of the game. 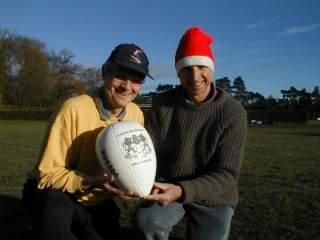 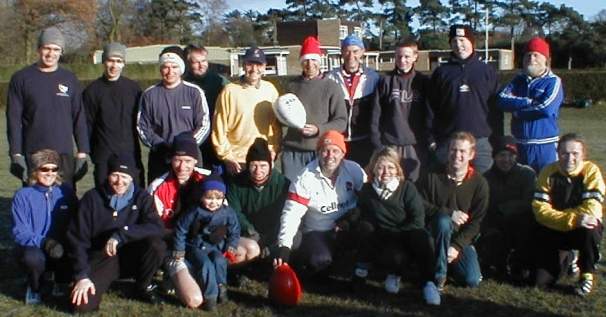 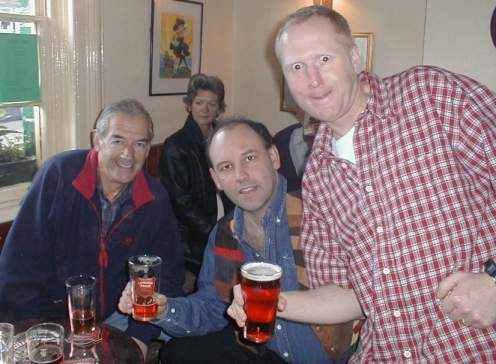 Rugosc is a non-contact sport combining the kicking, running and catching skills of a rugby full back and the goal -saving skills of a soccer goalkeeper. A game require two opposing teams, a ball and a field of play.

Each team may comprise one or more players. There are no field positions in Rugsoc.
2- BALL:
The prefered ball is the Rugsoc Match Ball approved by , and available from the World Rugsoc Association (WRA) .Uniquely it has both a pointed and a rounded end, being a combination of a rugby ball and a soccer ball. However the game can also be played with a rugby ball or , if this is not available, a soccer ball.
3- FIELD OF PLAY:
A marked pitch with goal posts offers the best playing field , preferably a rugby pitch. A soccer or hockey pitch is also suitable. An adequate substitute is an open space, with or without boundaries, with clearly marked goals.

4- TAKING THE FIELD:
Teams prepare to play by facing each other in their own halves of the field as for a game of rugby, soccer or hockey. The team winning the toss chooses either to kick off or has choiceof ends. Changes of ends can be made at half-time, or quater-time every 15 minutes in an official WRA match when there are atleast three in a team. Doubles or singles matches are more physically demanding. When a shorter period of play, such as two halves of 15 minutes, is recomended.

5- KICKING THE BALLS:
The kick off and all other kicks in rugsoc general play are by a punt or drop kick from the hand. A place kick is permitted only for penelaty kicks. (See note 10 PENALTY KICKS). Once the ball has been kicked, possesion passes to the other team which makes their return kick, and so on.

6- OBJECT OF THE GAME:
To kick the ball into the opponents goal, or also over the bar if playing with rugby postss. To score, a team tries to get within goal-scoring range i.e. in their opponets's half of the field. Apart from the distance achieved by kicking , distance can be gained, or lost , by other means.( SEE NOTE 9 GAINING OR LOSING DISTANCE).

7- SCORING:
With rugby posts, a soccer type goal under the bar is worth 3 points. Kicking the ball over the bar is worth 1 point. On any other field of play, a goal scores 1, An alternative scoring method is to add up the number of Gains ' and 'Errors' during play, when one's team's 'Error' counts as the other team's 'Gains' ( SEE NOTE 9c-i GAINING OR LOSING DISTANCE)

8- AFTER THE KICK OFF:
Kick off to start each half / quarter and after scoring is from the half-way line. Sides take it in turn to kick. Once the ball is in play, the other side gathers it as cleanly as possible in order to make their return kick No interfernce, such as tackling, is allowed on the player gathering the or when the return kick is made.

9- GAINING OR LOSING DISTANCE:
When the ball is kicked, one of the following rules may apply ( See also Note

10. PENALTY KICKS:
a) the ball, having bounced on, or rolled around the ground is gathered cleanly. The player making the return kick is allowed three paces forward as the kick is made.

c) the player gathering the ball succeds in catching it on the full, i.e. before it strikes the ground. This is 'Gain' (see Note 7 SCORING) After a successful catch , the player is permitted a 20-pace run before making the return kick.

d) in attempting to catch the ball on the full , the player drops it . This is an 'Error' and the return kick is forefieted to the side which made the kick. This team moves up and one of their players takes another kick, either at the point where the dropped catch occured, or where the ball is gathered.

e) the ball is kicked out of play over the touch line. This is an 'Error' and the distance made by the kick is forfeited to the other side which comes forward to take the return kick at the point where the original kick was made.

f) the ball is kicked out of play past the goalposts over the try line / goal line. This is an 'Error' and the defending team can take its kick from the 22 line or from the edge of the penalty area.

g) the team gathering the ball fumbles it over the touch line. This is an 'Error' and the return kick is forfeited, as in example 9d.

h) the team gathering the ball fumbles it over the try line/ goal line. This is an 'Error' and the defending team concedes a 'corner' . The attacking team takes another kick 15m in field fro the touch line on the 22 line /corner of the penalty area.

i) the team gathering the ball cannot reach it before it stops moving. This is an 'Error' and the return kick forfeited.

10) PENLATY KICKS:
Penalty kicks , which may be punts or drop kicks from the hand, or place kicks on the ground, are taken from the middle of the 22/ penalty area line. The defending team concedes a penalty kick to the opposing side by making the following errors in play:

a) dropping the ball when attempting a catch on the full inside their 22/ penalty area and not in front of goal. ( a ball dropped in front of goal cuonts as an attempted 'save' incurring no penalty , as long as the ball remains in the field of play. See Note 9h).

b) the ball is kicked from inside the 22/ penalty area out of play over the touch line or try/ goal line, or is not kicked out of the defending team's own 22/ penalty area.

c) the team gathering the ball inside its own 22/ penalty area cannot reach it before it stops moving.